On the 16th of October we had a lecture from Mark Pollock. Mark Pollock is blind and paralysed (from the chest down) and he's a motivational speaker. Mark told us his story and about how we should learn lessons from his struggles.
In 1998 Mark was a student in Trinity College. Over the space of a month or two Mark began to grow blind. Soon later, Mark was completely blind. Mark fell into depression and was in denial of his loss of sight. He most certainly did not bounce back from his injury. He stayed in his home for a while until he realised that being blind was just an inconvenience and a challenge. He decided to face up to the challenge and to live in the present. Mark told us how we too should be brave enough to accept reality.
10 years later (2008) Mark was back working hard. He had just recieved a masters in college, he was giving lectures about becoming blind and he had been running marathons. He acheived all of these things while being blind. His biggest challenge was travveling to the South pole with a team of two other men.
Marks life once again came crashing down when he fell of the balcony of a second storey. Mark was but in hospital and was there for 18 months. Mark was then completly paralysed from the chest down. He fell into depression again for a short while but people told him that he could recover from depression because he had done so before. Mark was then put in a wheelchair and he's accepted his disability.
Mrk flew to California to visit a company called 'Project Walk'. This was an orgainisation set up to help people who are paralysed to walkn again. He worked hard in the gym and has begun to gain power of certain parts of his body. His friend Simon was trained at the gym and now helps Mark with his training everyday in UCD.
Mark also flew to Berkely in the USA where a robotic suit was being developed by a company called ESKO.The skeloton suit was attatched to Mark and this allows him to walk. He does not use this all of the time as the product is still being developed. Mark says that companies like ESKO and Project walk are excellent as they ware changing the rules of what can and can't be done.
Mark then wet on to tell us about the Run For Mark. This is a charity marathon set up in cities around the world.

Posted by Jean Coughlan at 04:26 No comments:

On Tuesday the 9th of October we got a lecture from Dr. Rory E. Goodbody (PHD). He works with Astellas Pharma Co. LTD. He is a medical scientific liaison. He was telling us how he got his job and what you can do in the science industry.


‘’Pharmaceutical companies make the drugs that improve the duration and quality of life on a daily basis.’’. Dr. Goodbody told us how drugs and vaccinations decreased the number of cases in diseases such as measles. Before the vaccination came in place (in 1985) there were 99,903 cases of measles. Two years later there were only 201 cases.


Dr. Goodbody told us about the various jobs within the science industry:


o   You could stay in college, gain a PHD and then become a professor.


o   You could become a consultant.


o   You could work in research and developments.


o   You could work in the supply chain of the drugs (transport ect.)


Dr. Goodbody then gave us top tips of getting to work in these areas:


o   University is not just about your course so join societies.


o   Make yourself interesting on your CV.


o   Plan ahead for the future.

Overall I thought the lecture was good but as I am not interested in a job in the science industry I was not really affected by it. I think the lecture would have been really interesting and useful for anyone who wants a career in any of the sciences.
Posted by Jean Coughlan at 04:59 No comments:

Witness
Witness was released in 1985 and was directed by Peter Wier. The film tells the story of a young Amish boy who witnesses a murder in the city of Philedelphia. The policeman John Books hides undercover in the Amish Community until trial. The strengths of the movie are that t shows us the massive contrast of socirty between the Amish Community and the average modern day world. The weakness of the film is that Weir did not develop the realationship between John and Rachel enough and you could not tell that they were truley in love. I think that Harrison Ford gave an excellent performance in the film because he plays the part of a strong police man yet he shows his soft side.
A special moment in the film is the murder of the police man, near the beginning of the film. I think that this scene was precieved well because you could clearly tell that there was a tense atmosphere as soon as Samuel (the yound boy) entered the bathroom. Overall, I think that the movie was excellent as it was gripping due to the storyline and the characters were strong due to the actors. I would reccomend this movie to those over the age of 14 who are interested in the different societies and cultures in the world. I   think that people who enjoy crime movies. 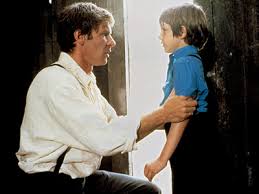 On the 25th of September we had a lecture from Denis Sexton. He is associated with  the Irish Society of Autism. Sexton's son is 27 years old and has had autism for his whole life. This is why Denis is part of the Society. Sexton told us how many years ago Autism was less common than it is now. In early statistics only 17 people in 10,000 had autism. Now 1 in every 100 people have autism. The massive increase in Autism may be because of the increased chemicals in foods.
Sexton told us all about the characteristics of Autism and how it is diagnosed. Some of the characteristics are:
John was thought to have had autism since the early months of his life. John still refuses to speak and has had a wide variety of obsessions. Some autistic people have 'freaky talents' such as being very strong at maths. Sexton told us about a boy who he knew who could tell you that day on the week a certain date was, even if it was thousands of years before.
Sexton told us how the Irish Society of Ireland had farms around the country. They said that it was found that the Autistic are happiest in a quiet, peaceful surroundings, away from the bustle of the city. Money is raised to fund these farms (and the rest of the charity) during 'Rose Week' which is a week of fundraising. Roseweek starts on the 11th of october.
I think that this was a very interesting lecture and i learnt a lot about Autism and those who are affected by it.
Posted by Jean Coughlan at 04:38 No comments:

On Tuesday the 18th September, we had a lecture from the The Childrens Chernobyl Charity. I was not present for this lecture but I have been told about the lecture. The two speakers told the year how the Dublin Rose, from the Rose Of Tralee competition went to belarus to volounteer. She worked with children who had been affected by the breakdown of the nuclear reactor. The speakers also told the year about the accident in Chernobyl and how it affexcted so many peoples lives. The incident is still causing problems because the birth defects caused by the incident are being passed on through the generations. The air is still not clear in the area. The charity has opened an orphanage to house children who have been affected by the breakdown. The standard of life in the orphanage is low and the charity are trying to raise funds to improve the lives of these children. The charity is clearly doing good work and are this lecture showed this.
Posted by Jean Coughlan at 04:22 No comments:

Every tuesday afternoon in fourth year we have lectures. Our first lecture was from a man called Zoltan Collis who is a Holocaust survivor.He startesd off by telling us his background. He told us about his family, friends and general life before the holocaust affected him. Mr. Collis told us how his fateher was jewish and his mother was christian. Due to his fathers religion Zoltan was taken to a concentraion camp. He was split up from his father and never saw him again.He told us about how difficult and horrendeus life in the concentraion camp was. We watched a video that showed life in the concentraion camp, Burgen-Belson. The video was really graphic and it showed rotting bodies.Collis told us about life in the concentration camp and why it was such a horrible place to live. The concentration camp was liberated in 1945 and Mr. Collis was free. He was brought to Ireland as a refugee and grew up here. I'm glad that i got the opportunity to hear this story because it clearly showed how people were affected by the holocaust even at such a young age. I think that everybody who gets the chance to attend a lecture like this should as it would enchance their view of the holocaust.
Posted by Jean Coughlan at 08:34 No comments:

Are you more likely to die in an earthquake if you live in a developing country? on Prezi

Posted by Jean Coughlan at 08:49 No comments: